Prison-Trained Service Dog Is Pivotal For Boy With Autism

Zach Tucker, who has Asperger’s syndrome, stopped hugging his parents when he was 5.  At age 9 he was still doing kindergarten work, and he would stay up all night crying.

Then they got Clyde, a service dog specially trained to work with Zack and his autism.

The first night Clyde stayed with Zack, the all night crying stopped.  Within three weeks he was spontaneously hugging his mother.  And 2½ years later, he had caught up with his classmates and his math skills were even a couple of year ahead.  And he’s popular.

But this is also the story of Christopher Vogt, the convicted killer who trained Clyde in his Colorado prison cell.  Vogt was the first inmate to train a service dog.  Then, after reading books to teach himself about autism, he was the first prisoner to train an autism service dog.

When asked what helping kids such as Zach means to him, Vogt broke down in tears.

This is a genuinely heart-warming story that deserves to be read in full here. 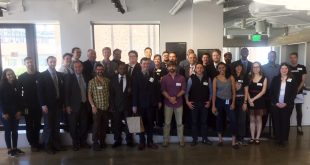